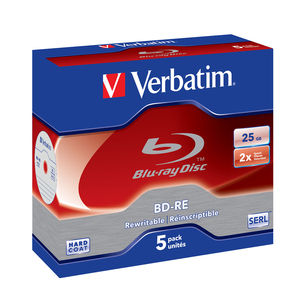 The advent of Blu-ray technology has led to the introduction of high capacity storage discs to meet the demand cause by the rapid growth of high definition television (HDTV).Blu-ray discs get their name from blue laser technology. The shorter wavelength of the laser is the reason it is blue in colour. The blue laser has a wavelength of 405nm compared with the wavelength of 650nm for DVD which utilises red laser technology. The benefit of having a blue laser with a shorter wavelength means it is possible to write smaller data pits and therefore vastly increase the amount of data on the disc.Blu-ray discs offer 3 to 5 times the storage capacity of a standard recordable DVD disc, enabling the recording, rewriting and playback of high definition video (HD).
For use only in drives or recorders that support Blu-ray Discs without cartridge.Capacity: 25GBSpeed: 2xPack Style: 5 Pack Jewel CaseThis disc complies with BD-RE Specification Version 2.1.Product Number: 43615*GB = 1 billion bytes. Capacity available for storage will be less; device uses up to 10% of memory for formatting and other functions.